International travel is off the cards for us all right now, but that doesn’t mean we have to stop exploring.
With some of the best travel shows streaming on Netflix, we have the world at our fingertips – with episodes that take us from markets in Mexico to hawker stalls in Singapore to the farthest reaches of the Arctic, and to BBQ joints in Kansas City. Whether you’d rather follow the late, great Anthony Bourdain, Sir David Attenborough, David Chang, Samin Nosrat, Samantha Brown, Jeff Goldblum, or the Fab Five along the way is up to you.
Below are some of my favourite travel shows involving journeys by land, air, and sea—and lots, and lots and lots of eating.

You simply cannot have a list of the best travel shows and not feature the late, great Anthony Bourdain. In fact, he’s on our list more than once. In Parts Unknown, the chef and travel personality circled the world many times over, in search of music, culture, humour, history, and—of course—really good food. Over 12 seasons (the last aired posthumously), Bourdain visited the indigenous Andes with Eric Ripert, the Sochi Winter Olympics, the Mississippi Delta, and, most famously, Hanoi with then-president Barack Obama. 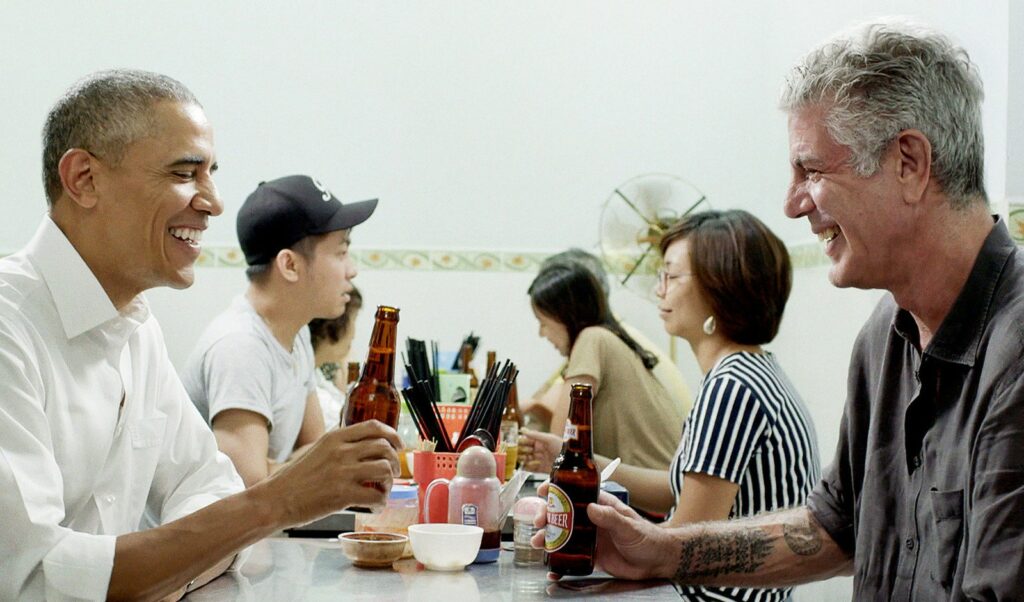 Made by the same folks behind Chef’s Table (also on this list), this show moves away from formal restaurant kitchens and onto the streets, for a guide to some of the world’s best curb-side meals and snacks. The show’s first season is all about Asia, traveling to nine different countries to meet the people behind the food, like a Michelin-starred street stall serving up tom yum soup, and Truoc (pictured below left), who serves a variety of snail dishes in Ho Chi Minh City. Stops in India, Singapore, the Philippines, South Korea, Taiwan, Japan, and Indonesia are also on the itinerary.
A second season focuses on Latin America, and is streaming on Netflix now. Be sure to watch this show on a full stomach, or you’ll be pausing to bake focaccia or cook tahdig along with affable host and Salt, Fat, Acid, Heat cookbook author Samin Nosrat. (below right). In the four-part show, Nosrat travels the world, making stops in Mexico, Japan, Italy, and her home in California, to discover the properties of each of the show’s title elements. There’s cheese. There’s olive oil. There’s miso. There are tortillas. There’s salsa. And just like that we’re hungry again.

The second season of Ugly Delicious, the David Chang hosted Netflix series debuted in March 2020, taking viewers from Istanbul, to Tokyo, to Sydney, to… Outback Steakhouse? Along the way, he tackles balancing parenthood with restaurant life, cooks with Top Chef‘s Padma Lakshmi, rubs elbows with comedians, and gets a lesson in not calling all Indian food curries. (If you want more Chang, watch Breakfast, Lunch, and Dinner, also on Netlfix, where he joins one famous friend on a food tour of a city, like Chrissy Teigen in Marrakech.) 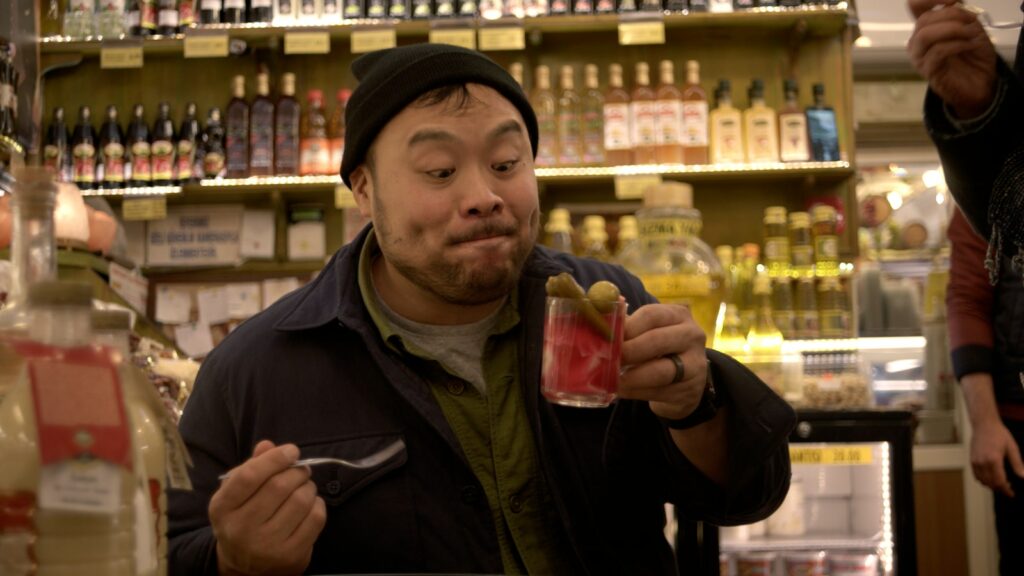 If you’ve ever raised an eyebrow at food as art, set aside some time to watch Chef’s Table, a Netflix original docuseries. Each 50-minute episode profiles one of the world’s most extraordinary chefs (like Dominque Crenn of the Michelin-starred Atelier Crenn in San Francisco, pictured; Peruvian Virgilio Martínez, the owner of Lima’s Central restaurant; and Swede Magnus Nilsson) as they create impossibly complicated dishes. There are four seasons, and all very much worth a watch. 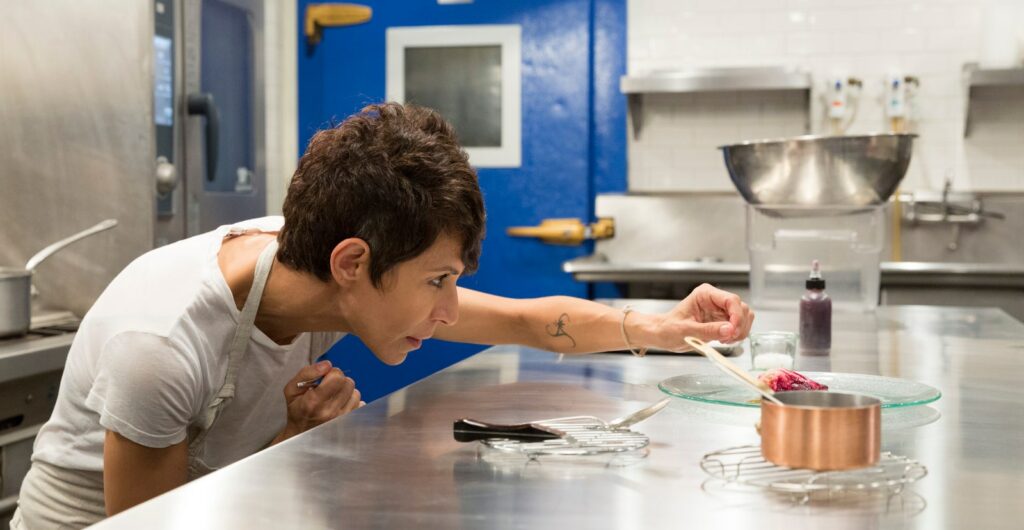 Set in a tiny Tokyo diner that’s only open from midnight to 7 a.m., the fictional show follows the Midnight Diner‘s owner and clientele as they share their trials and joys, all while eating whatever the owner, called Master, dishes up. In the diner, pork miso soup is the go-to, but Master will cook visitors anything they order, as long as he’s got the goods to make it. Episodes are a little over 20 minutes long, so it’s the most binge able of the bunch. Watch with subtitles and don’t—seriously, don’t—watch while hungry. 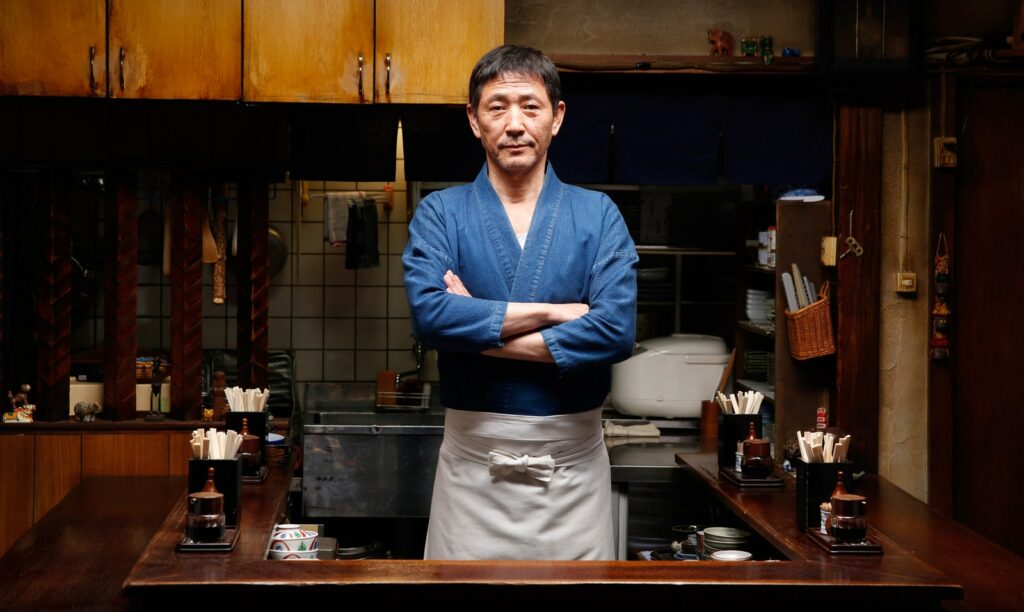 So stay curious everyone, and hungry!
Jemma and the Mai Journeys team…

AUTUMN IN JAPAN – OUR 2ND INTERNATIONAL TOUR FOR 2022

TIME TO GET YOUR CREATIVE ON….

Have a question? Call us